The 8 way Controller for the LED strip or lamp made by HTKLIGHT is the number one tool for a lighting designer that wants manual control of their strip light. There are 21 built in programs and it is sound activated too. For even larger displays that will be out of this world, you can daisy chain the 8 way Controller to another 8 way Controller. Also for your convenience HTKLIGHT has built in a reversible, hanging/truss bracket just to make your life a little easier. In addition to the 8-way driver/controller you can purchase the HTK wireless remote control so that you can control the LED strip light from anywhere. HTK-LED DRIVER800 for the led strip light will give you the strip light that you are looking for with the capablities of having 360 degrees of bright LED light with various color effect.

As it serves, HTK-LED DRIVER-800 is a perfect combination of LED driver and LED controller for led strip light/LED lamps. There are 8 way outputs, with each way 100Watt power. Users are able to choose DC12V or DC24V according to there actual needs. unlike the troditional drivers with power supply only, this device has a programer inside. With 21 onboard color programs, users are able to control the strip light via the LCD display, which has a easy operation, even for unprofessional users, it is easy to operate the programs.

In DMX mode, users could link them with a DMX cable to an external DMX controller or software like sunlite suite, then they can edit programs on a DMX controller. It is such a functional LED driver that users could creat their own beautiful effect with creative mind and idea. HTK-LED DRIVER-400 is a funtional LED driver with 4 outputs, and there are 5 DMX working modes: 3CH,4CH,6CH,24CH,32CH,48CH, In modes of 3ch,4ch and 6ch, all the outputs runs the same program, and for 24ch,32ch, and 48ch,each port can be controlled seperately, so users are able to creat their own effect with an innovative mind. 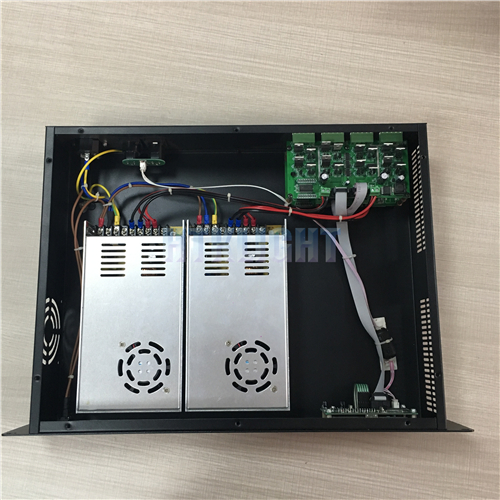